In early 2019 AcclaimIP launched a new alerts system, which was rebuilt from the ground up.  The new alerts replaces the previous system in AcclaimIP, and existing alerts were migrated to the new system.

This article and help guide only covers the current alert system in AcclaimIP. 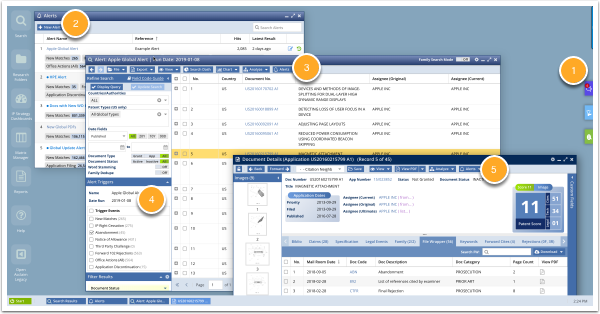 How The Alerting System Works

Some collections are not received right away, so by the time AcclaimIP receives some new documents, the publication dates can be more than a week old.  For example, JP, CN, and KR documents require an English translation step which takes from 7 to 10 days after the documents are published in their original language.  The New Matches trigger takes all of this into account and will show these "new to the system" documents in the New Matches trigger.

In other words, the alert system ensures that you receive new matches even if their publication dates are in arrears.  As an extreme example, say the Lithuanian patent office found a 30 year old patent behind a filing cabinet that was never published, and they published it just last week, this document will now show up in your alerts as a "new" hit.

You can create a list of recipients for each alert.  The Email Distribution tab is where you set who you want to have the alert sent to. This includes yourself, as you are not included on the email chain automatically. This way you can set up alerts for others, and not flood your inbox with alerts that are not of interest to you.

The system integrates alerts into the existing workflows, making it easy to set up alerts, update alerts, and review matching documents each week.

In the current workflow, you can set up one alert with multiple triggers, and when reviewing the hits, you can quickly filter on triggering events and determine, for example which hits are new matches and/or which are existing applications that received new claim sets in the file wrapper.

Inclusion lists allow you to append your alerts with known documents (or patent families) event if they don't match your base query.  For example, say you have a really good technology query, and you want to alert on expired patents and abandoned applications from the matches, you can append your base query with a list of known relevant patents, and even if they don't match themselves, you'll still be alerted when that go abandoned/expire.

The inclusion lists also allow you to alert only on specific documents without adding a base query at all. This is what we call our "Watchlists." Creating an alert with the "Inclusions Only" radio button allows you to set up an alert this way.

Now you can go back in time and review "new" matches to your alerts from all previous runs.  For example, if you were on holiday last week, or need to review what matched an alert six months ago, you can quickly access the historical matches.

Currently alerts only run on Tuesday mornings.  A Tuesday run date has two benefits.  First it allows us to run the alerts processes well after the weekend's indexing is finished, but it also runs after the new US grants are published early Tuesday mornings, which notifies you of US grants the day they are published rather than waiting almost a week until the subsequent Monday.