They work by appending particular documents or patent families (if Family Expansion is ON), to the base query, and effectively match (or are excluded from) the base query even though technically they may not be matches.  It is probably best to illustrate how they are used by way of example.

One thing to note: Unlike the New Matches query, which evaluates to true only one time during the life of the document, the other 43 canned triggers evaluate to "true again," and may alert on a document multiple times as long as the event itself was new for the first time to the document.

In this scenario, I first used some existing alerts to monitor a competitor or a technology.  Naturally, I found specific applications that could potentially be problematic for our company for various reasons.  For these targeted documents, I want to alert on new family members and also some status changes in the US file wrapper for US applications.  I set up a "Watch List" alert like the one below. 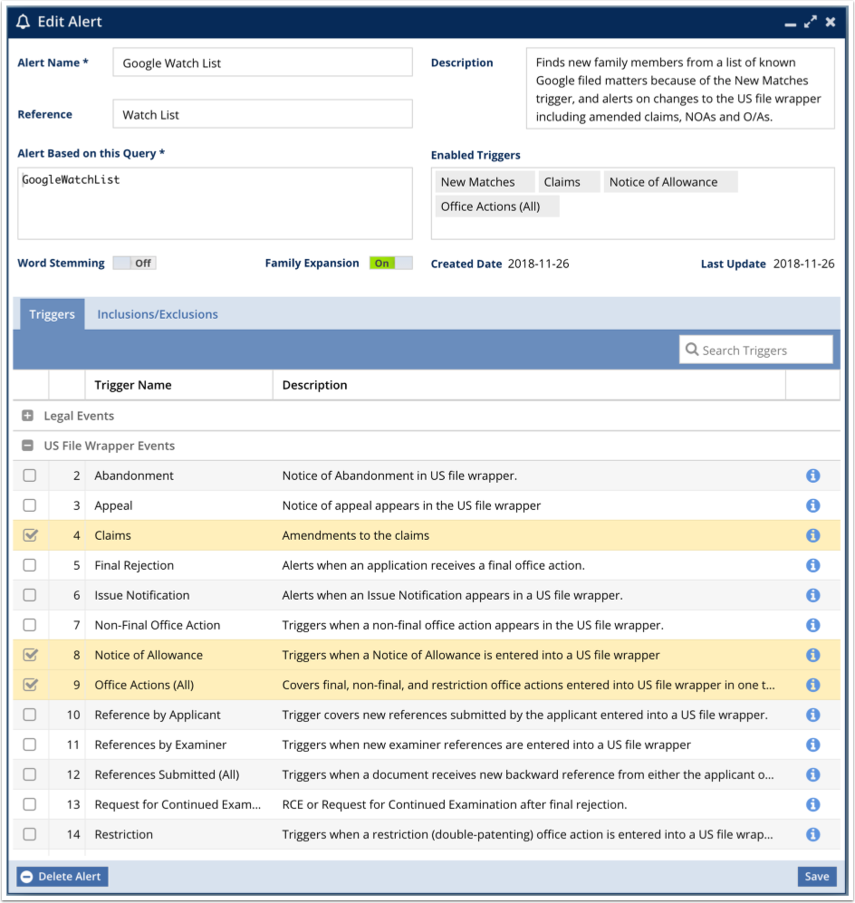 In this "Watch List" alert, notice the base query is on "GoogleWatchList" which should never match a single document since it is a nonsense telescoped word.  I also set triggers for New Matches and three US file wrapper canned triggers, new Claim Sets, NOAs and O/As. 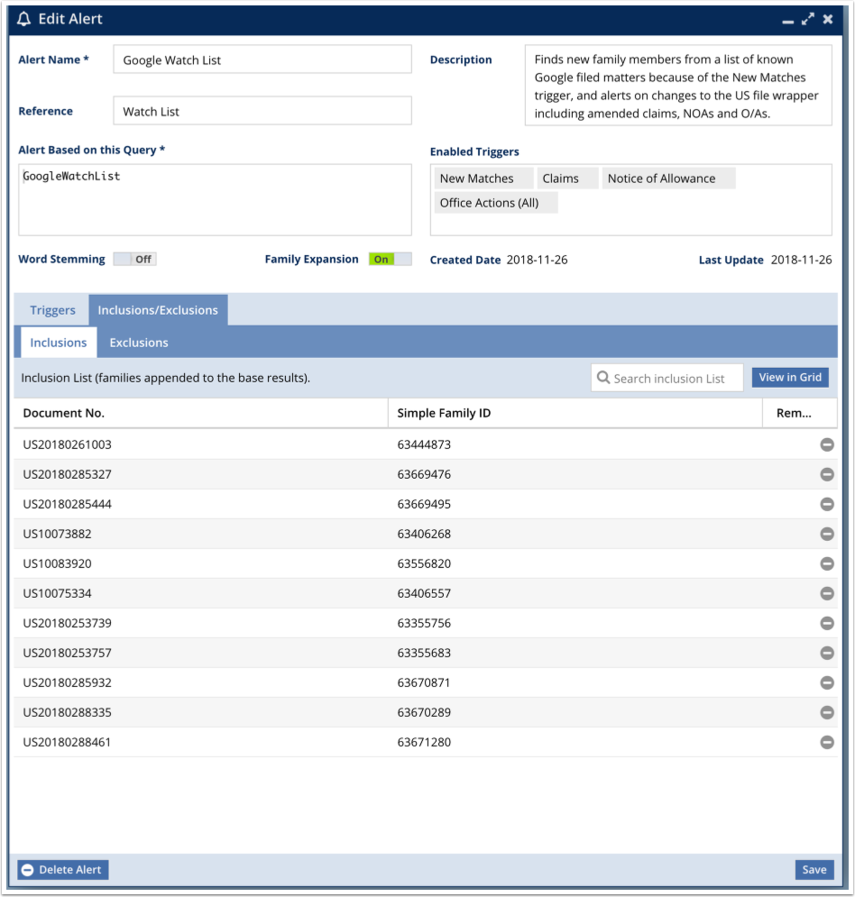 Now to my nonsense base query (which should never match anything), I added 11 specific documents/families I want to track.

Because Family Expansion is ON, anytime a new family member is published, I'll get a New Matches alert displaying that new filing.

In addition, because of the three US file wrapper triggers, anytime these documents (or their US family members that are in prosecution) receive a new claim set, or an office action, or notice of allowance I'll also be alerted with the appropriate trigger event.

Use Case 2: Stop alerting on specific patents/families without impacting the rest of the alert

In this scenario, I have an alert that is working for me quite well, but the base query is a bit overly broad, and it matches on a few patents that don't interest me. 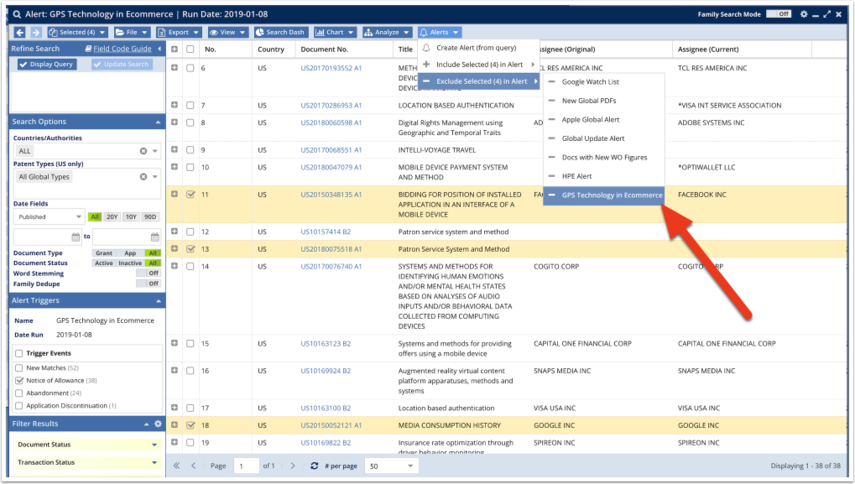 Select the patents in the search result grid that you no longer want to be notified of status changes in this alert, and select Alerts>Excluded Selected in Alert>'Alert Name' from the Alerts menu. 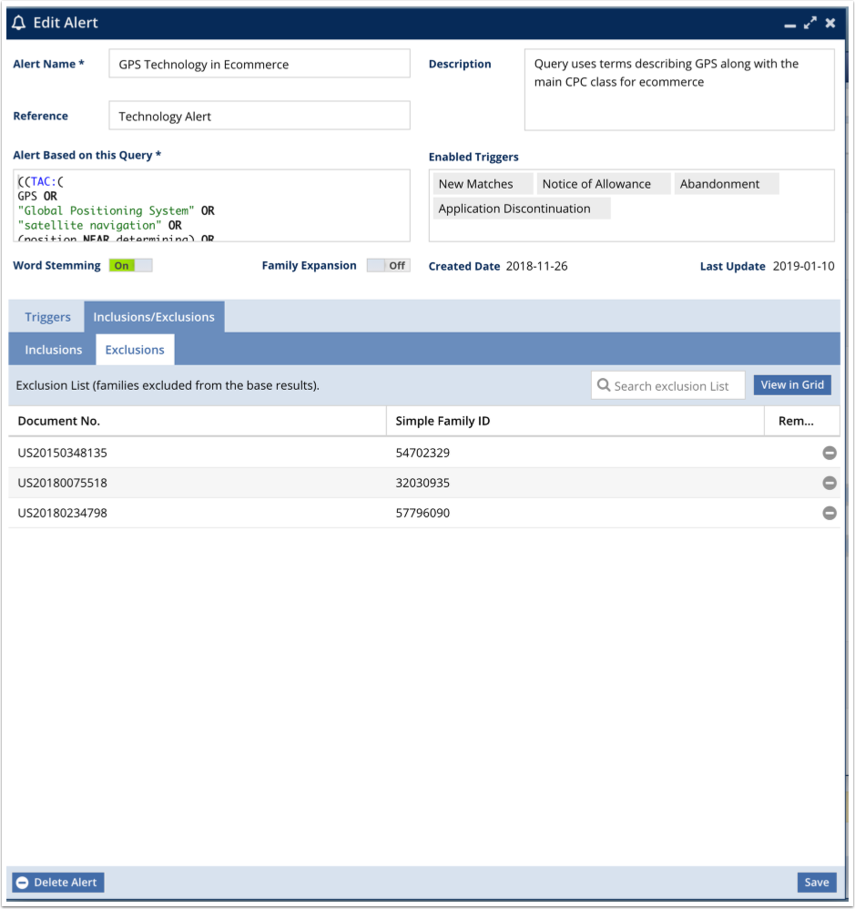 As you see above the three documents are added to the Exclusion list and AcclaimIP will no longer alert you to status changes of these documents even though they may match the base query.

To add a patent to either the Include or Exclude list, click the "Alerts" menu which is located on both the Search Result and Document Details windows.

If you are appending documents to either list from the Search Result, first check the documents you want to add, then select Alerts>Exclude Selecte (N) in Alert>$AlertName$ as shown below... 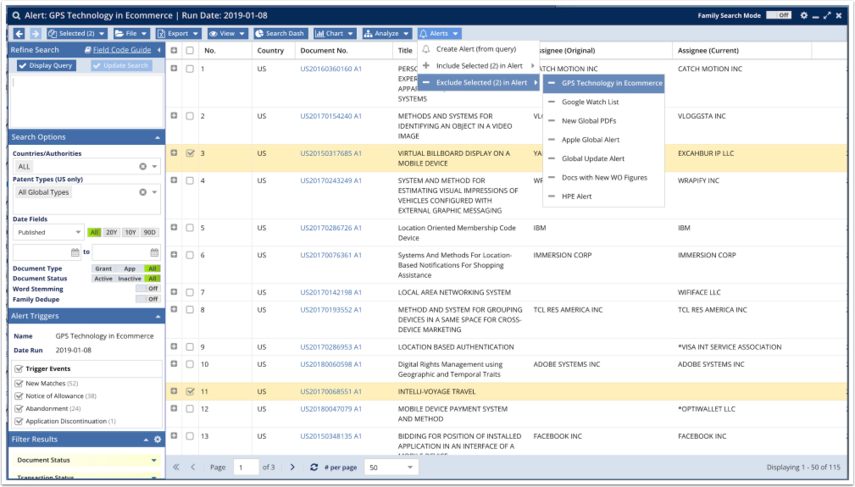 To remove a document from a list in an alert: 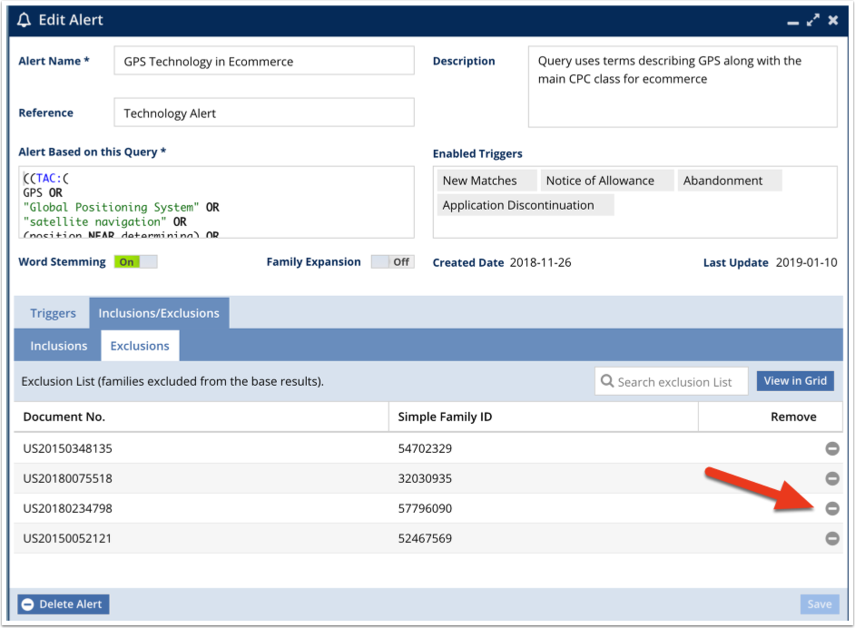