Real patent value comes from value metrics that can only be accurately determined by experts in the field who take the time to read the patents, review the claims, and make judgements to the patent's value.  There are lots of systems for rating patents of varying complexity, but the most basic one, is perhaps the most useful and easiest to implement.  It covers four specific dimensions:

AcclaimIP has many different value indicators in the system that you can use to help make these decisions, but users can also use the custom fields feature to build rating systems, design workflows and rate their own patents along these dimensions.  A rating system, along with a home-grown taxonomy, makes you well-prepared to respond to any offensive or defensive opportunity you are presented with. 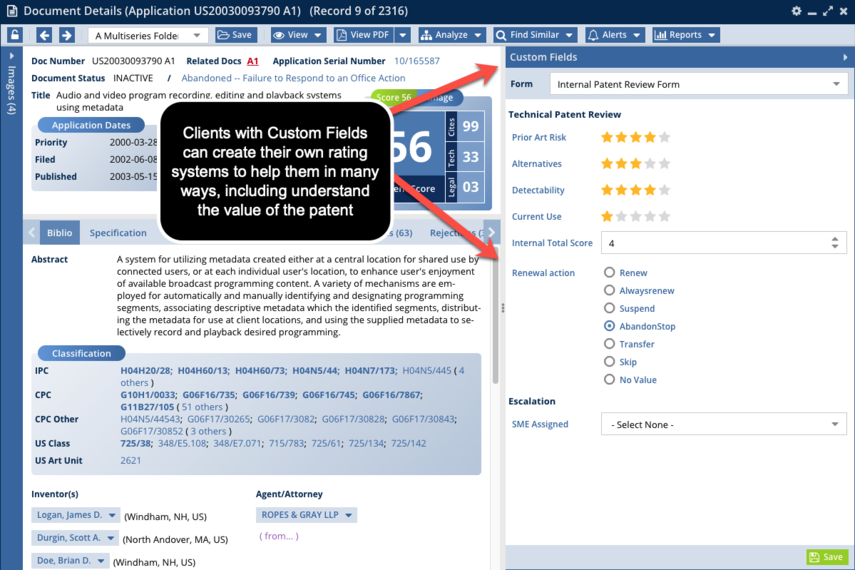 Manual Ratings systems like the simple one shown above can be embedded into AcclaimIP.  The form is editable by the user so workflows can be implemented directly inside of AcclaimIP.

Value indicators are not ratings systems, but they are very helpful to the patent researcher because they help you focus on patents that are potentially valuable.

Value indicators suggest that a patent may in fact be valuable.  Taken together, they can help you build a picture of the patent, what the applicant thought about the patent at the time of the invention, what the rest of the world thinks about the patent, and what happened during prosecution that may be indicative of better, stronger patents.

Patents from larger patent families are often some of the best patents since they represent a large financial investment by the applicant.  Sometimes a single invention is patented in more countries, while other times the priority document had a terrific specification and many continuations, and their international counterparts, were derived from the priority document.  In each case, patents from larger families are often high quality patents and should be investigated.

Not only can you see the family size columns here on your search results, but you can see both the Simple Family (or DocDB Simple Family) and the Extended Family (or INPADOC Extended Family) size. Additionally, you can view the other simple family members right in your search results if you so choose (e.g., for a Freedom to Operate search) or on the patent document itself, you can search for specific count ranges for either, you can search for families that have filings in particular countries, etc. 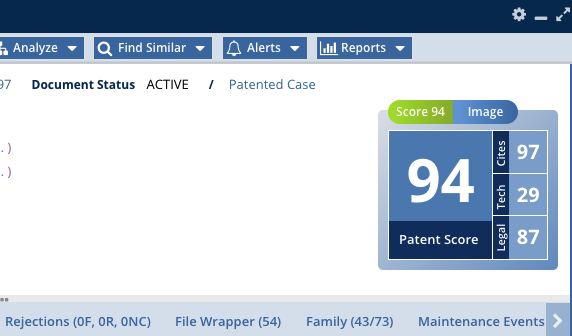 AcclaimIP has a proprietary patent score algorithm that has calculated several scores for every patent document in the database. These scores use multiple different metrics to calculate each score and can help you determine the strength of the patent.

Often, you have to determine many things about a patent based on what you think of as the strength of that patent. For example, if you're making annuity decisions. But you probably only have a few minutes, at most, to determine that patent strength. You don't have time to actually read through not only the target patents, but other patents in that same space to compare. On the other hand, relying only on one metric (such as the family size, and only the family size) is often not a good idea. This is where a scoring system comes into play.

Having the system automatically calculate, from week to week, a patent based on various metrics can give you a quick view in to the probable strength of that patent. And being able to search and sort patents by the various scores help to make your decisions easier. For example, let's say in those annuity decisions you are making, you have been given a list of 100 patents that you know are not key, strategic patents for your company. You are told you have to cut 25% of those patents, as the company doesn't have the budget to pay for the annuities for all of them, and the decision has to be made quickly because you're walking into that budget meeting in 30 minutes. In that example, maybe you want to plug those 100 patent numbers into AcclaimIP, sort by score, and cut the bottom 25%.

The point is, it takes time to earn forward citations, so the value indicator doesn't become useful until about 3 to 5 years after a patent is granted.

Patents are cited for different reasons.  Sometimes to make a 102 argument where the cited patent is direct prior art to the claimed invention, in which case the application will have to be narrowed in order to grant.  103 rejections combine two or more references to argue the obviousness of the inventions.

Patents are cited for all of these reasons, but more often than not, patents with more forward citations represent higher quality patents.  As a result forward citations have always been a very popular value indicator.

In AcclaimIP, we can search and sort by the number of forward rejections. That is, we can find patents that have been used by USPTO examiners in 102 and 103 rejections against other patent applications. This is basically allowing the examiners to do your work for you. They are finding other patents that are incredibly similar to your patent. This means that other organizations are trying to patent the same types of things that you are, and so your patent can become more valuable because of it.

Note that AcclaimIP can even break down patents by having blocked a particular competitor with a 102 or 103, which could lead you to find strategic patents that you did not consider strategic.

Likewise you can find patents that have not been used in any 102 or 103 rejections. Although this doesn't automatically mean that the patent is weak, especially if it is a newer patent (as it takes time after publication to build up rejections), but it may lead you to the conclusion that competitors are not filing in the same spaces that you are.

Putting It All Together

Spotting potentially valuable patents without reading a single word of the patent is quite simple.  You simply build a story from the meta data.  Consider the patent list above.

Note the patent at the top of the list. It has 44 simple family filings, a patent score of 95, 41 forward citations, and has been used in thirteen 102 rejections. Based on the fact that this patent hits on all cylinders, I would bet this is an important patent.  In any case, I would pay attention to it.

Other patent data elements have been shown to be potential indicators of patent value.  In each case, you can expose the meta-values in your search grids.

Pendency:  Extremely long pendencies are indicative of interferences and often represent some of the very best patents.

No. Inventors:  Often important inventions have either a single inventor or have many inventors.

No. Reverse Citations:  Patents with relatively few cited references may be original in a category.

Total Words in Patent:  Long patents may have specifications with very broad coverage that could potentially be used to write additional continuations.

Number of Claims:  Currently there is a fee submit an application with more than 3 independent claims and/or more than 20 total claims.  A large number of claims represents a larger investment by the applicant, and therefore may represent an invention worthy of the extra fees.

Length of Claim One: Patents with shorter independent claims tend to be more broad and have fewer limitations than patents with lengthy claims.  As a result, some of the broadest patents have the shortest claims.

There may be more, depending on the technology space you operate in. AcclaimIP constantly strives to give you access to all the data you need to make these value decisions.